In the early nineteenth century in Australia, there was a great need for a tough all-rounder, a horse which was hardy and reliable with a good temperament. They needed to be able to work in harness or under saddle in order to plough the land, clear timber or herd cattle and sheep. The horses which evolved for this were referred to as “Walers”, which were renowned for their stamina, courage and soundness. Later in 1971 the term Stock Horse was introduced.

Conformation: varies considerably, however, very  similar to the Thoroughbred with particularly good, sound limbs and feet

Stock horses have slowly made their way to the polocrosse fields of South Africa over the last 20 years or so but now with over two hundred foals that have been bred on South African soils; they are starting to prove their skills, making their presence on the polocrosse field more sought after by the day. Rialda Ranger- imported and owned by Charles Van Wyk and James Cutler, was the first registered Australian Stock Horse stallion to have progeny playing in South Africa and while he seems to have set the standards on top class polocrosse horses, Edenhope-Bundy looks set on a road to success with his first crop turning 6 this year and already having 6 of his progeny playing at World Cup level in 2015!

We spoke to Tony Higgs, shareholder along with Peter Choice in currently South Africa’s only registered Australian Stock Horse stallion Edenhope-Bundy about their breeding journey and what gives these horses the ultimate polocrosse edge.

“I was introduced to the Australian Stock Horse during my first tour with the South African team to Australia in 1995. Although I was not immediately “blown-away” by the breed, they did seem smaller in stature and quicker off the mark than the standard playing thoroughbred. We realized how South Africa’s ‘game’ had evolved around the speed of the Thoroughbred because most were ex-racehorses, however, we returned with a new perspective after receiving horsemanship lessons in Australia. We employed Peter Choice from Australia to coach us and later, James Cutler joined him. James and Charles Van Wyk eventually imported the first registered Stock Horse stallion to South Africa called Rialda Ranger.

Peter sent me Pocohontas as a two and a half year old to try out. She was the second produce of Rialda Ranger and Peter Choices’ top mare. I remember phoning him after I had ridden the horse for about 5 minutes to ask how long they had been schooling her as she was better educated than my main playing mare. He assured me they had literally only backed it the week before! The penny finally dropped that Australian stock horses are bred to be naturally balanced and have a natural herding instinct. It just remains for the rider to control it and get the horse to listen to you”

After 3 years of extensive consultation with Darryl Smith, a renowned horseman and breeder in Australia, we were offered Edenhope-Bundy, who duly arrived in 2009 as an 8 year old”

Do you prefer them? If so, why?

“I am more interested in the hybrid cross between the Thoroughbred and Stock Horse. Thoroughbreds have more than proved themselves in all disciplines and we have taken great care in selecting the Thoroughbred mares that have been bred to Bundy in order to produce quality offspring.

Tell us more about Ranger and Bundy

“Ranger and Bundy differ in conformation with Ranger being slighter than Bundy. Rangers’ progeny are all extremely talented, intelligent, lateral and show all the abilities of a genuine stock horse. Bundy on the other hand throws heavier foals that are also highly intelligent and exhibit all the traits of a true Australian Stock Horse. We must however point out the importance of the mares here, Ranger and Bundy have both been very successful sires with the performance of their progeny as proof, however as I said earlier, we have taken great care in the selection of the mares as well and we always remember the “rule of thumb” that a well-bred, champion mare wil always produce better than herself. 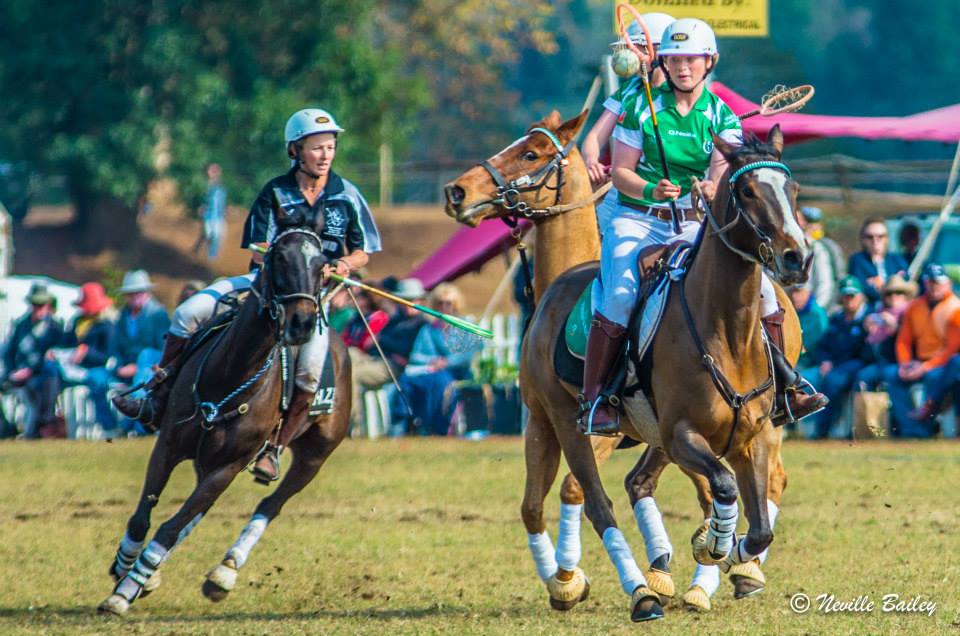 How have these sires been successful? Tell us about their progeny and their success on the polocrosse field.

Ranger bred for many years and it was a huge shock to the polocrosse community when he passed away after being diagnosed with testicular cancer. He does however live on in many offspring that continue to prove his success as a sire as you will always find them at every polocrosse championship or international throughout the country. They are generally the top contenders for the champion pony prizes as well. Bundy’s first crop of foals in South Africa are rising 6 this year and to date have won many accolades on the polocrosses (and polo) fields! At the polocrosse World Cup held in Shongweni last year there were 6 Bundy progeny playing at that level as 5 year olds, which, most will know is almost unheard of. We have been pleasantly surprised to see that a lot of Bundy’s foals are competing equally well in both polo and polocrosse and we are planning to expand our breeding programme to other disciplines.”

Without forgetting that there were roughly 200 horses at the polocrosse World Cup in 2015 and majority of which were Thoroughbred, we asked Tony Higgs his opinion on what gives the Stock Horses the ‘polocrsosse edge’ on the field.

“There are a number of thoroughbred lines that have been, and are still very successful on the polocrosse field due to their athleticism and speed; however it has always been a long process to find and nurture a thoroughbred that you have got off the track to compete in your chosen discipline. The stock horses were originally bred to be hardy, intelligent all-rounders to be able to herd cattle and sheep on the farms in Australia. The agility, balance, acceleration and lateral movement, as well as temperament, intelligence and ability to adapt that comes from that I think is what provides the ‘polocrosse edge’ . ”
Contact Details:

There have been many legendary horses to have graced the polocrosse arena over the years; well-known beauties that have been simply outstanding at the game. I can think of a few off the top of my head: Buccaneer – ridden by James Hackland; Rio and Speedy – of the Maclarty family; and Holly – ridden by Andrew Heynes. And then there are countless lesser-known horses that have served their riders well for years on end and have been faithful, much-loved servants of the game. My horse, Shogun, probably falls into the second of these categories.

I first started riding Shogun when I was around 11 years old. I was fairly new to the sport, and had previously played three other horses: Folly, Blaze and Bullet. All of these horses were old, gentle animals who were perfect for a beginner but couldn’t take me much further than that. We bought Shogun when he was only 3 years old, and after training him up for a few months my dad decided that I should get on and try him out. I can remember being terrified of riding a new, young horse and leaving behind the safety and comfort of the older horses, but my dad can be stubborn at the best of times and insisted that I give him a try. And so I tried him out in the paddock at home, and after one ride decided that this was the horse for me!

It so happened that I had just been selected for the first time to play for the Under 14 KZN Midlands team, and Interprovincials were coming up soon. Despite having only ridden Shogun for a few weeks, I decided to play him at the tournament. I used to play in the Number 1 position at the time, and that was where I started the tournament. After the first game, however, it became evident that Shogun might make a good Number 3 horse. On a number of occasions, he spun so quickly out the front of the lineout that he beat both Number 3s (out the BACK of the lineout) and allowed me to get onto the ball first and go score. I thus moved to the Number 3 position, and that’s how things stayed for the next 11 years!

Shogun continued to get better and better as the years went on, and he carried me through every level of the game. He had a phenomenal left-hand turn, and knew instinctively where I needed to be on the field (often better than I myself knew). Around 5 years later, we were playing in the A division and he was competing spectacularly well at the back of the lineout against some of the best horses in the country. He often was so quick to turn that I had to force him to stay in the lineout a little longer for fear of getting blown up for an early turn! He also developed a useful “leap” drive whereby he would spin and then do a little leap forward before continuing to drive and chase the ball/opposition.

Shogun and I got to know each other’s every motion: he knew exactly how I liked to play, and I knew what all of his strengths and weaknesses were. We became so adapted to each other’s styles of play that whenever I rode another horse, I didn’t do as well, and whenever anybody else rode Shogun, he didn’t do as well! I developed a routine warm-up that I would do with him before each game: gallop onto the field; stop and do a few spins; do some360 turns on the spot (much to the amusement of some of my teammates); walk backwards and then jump forward; and stand in the centre of the field and practise setting up for the lineout.

I continued to play Shogun in the Number 3 position in A division for another 6 years. That in itself is a respectable feat for a polocrosse horse, but on top of that he played in 4 international series and a World Cup. Remarkably, aside for the odd lamie, he was only injured once during the 11 years that I rode him – and that was owing to a minor horsebox incident, not an on-the-field injury! He was the most solid, ever-ready horse I have ever encountered. In the last couple of years that I rode him, Shogun started displaying signs of his age, but he never stopped outspinning other horses at the back of the lineout!

Eventually, in 2015, I decided that Shogun was ready to have a well-deserved retirement from fast-paced polocrosse. The last chukka of our last game was a memorable moment – our team came back from being 7 goals down and scored 8 goals to win the game! I was and am still in awe of this amazing horse and the polocrosse journey that he has taken me on. Shogun never once won a “Golden Pony” award, but in my mind he deserved them all – a true champion!

Shogun is now 15 and will be spending his remaining years continuing the legacy playing polocrosse with Karen and Gavin Cocker’s children living in beautiful green pastures in the KZN Midlands country side.

Also that we have Gauteng Champs coming up 18 – 19th June at Arnot near the Eastrand Polo Club.